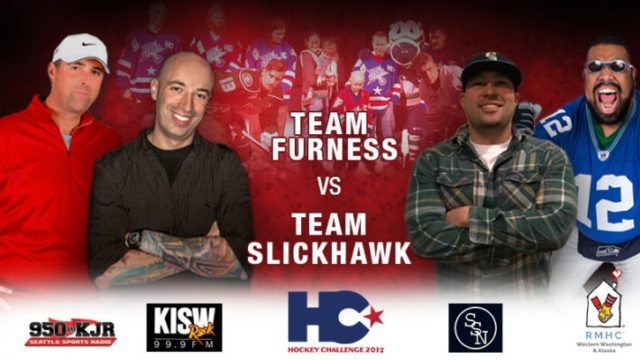 Jackie Soo and John Barr are sharpening their skates and preparing to hit the ice this weekend for their favorite fundraiser: the Seattle Thunderbirds’ 19th Annual Hockey Challenge, benefiting Ronald McDonald House Charities of Western Washington and Alaska. This will be John’s 13th year taking part in the Challenge; 12 years for Jackie, and each remains passionate about participating.

“Hockey has always been my sport and there’s no better way to be able to play your sport and raise money at the same time,” Jackie reflected. “I had just moved to Seattle when I found out about the Hockey Challenge through a Microsoft friend. It was also the first year that two all-women’s teams would participate in the event.”

John’s involvement began in a more personal way. “I used to volunteer at a Ronald McDonald House in a different city and learned all about the great work the RMHC does for families. Once I moved up to Seattle and started working for Microsoft, I heard about the RMHC Hockey Challenge and figured it was a great way to get involved.” 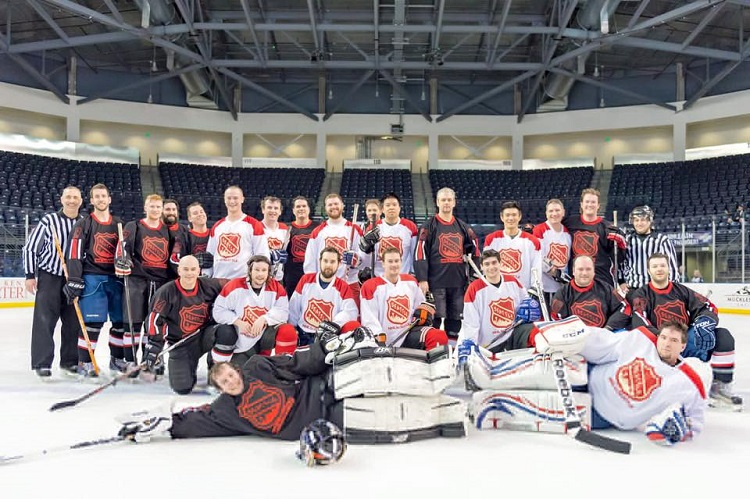 John’s played in the Challenge for 13 years, but ten years ago, he began putting together two teams that ended up playing each other. This year’s teams feature Microsoft employees facing off against Amazon employees, with several of what John called “free agents” thrown in for good measure. It’s become a little easier for him to compile two teams, mostly because of the players’ own philanthropic natures.

“All my guys are fundraisers, which hasn’t always been the case,” he said. “Ages range from 23 to 43 and they are all my friends, several of whom I actually met through doing this (the Challenge) every year.”

He recalls one memorable game. “The game was back and forth all game and the last 5 minutes of the game, things got intense. There was subtle checking, penalties and a slash. It was all in good fun but nobody wanted to lose that game. We held on to win 7-6 and probably more importantly, raised $40,000 for the (Ronald McDonald) House across those two teams.”

In 2012, Jackie and her teammates invited a girl named Katie and her mom to be their honorary guests. 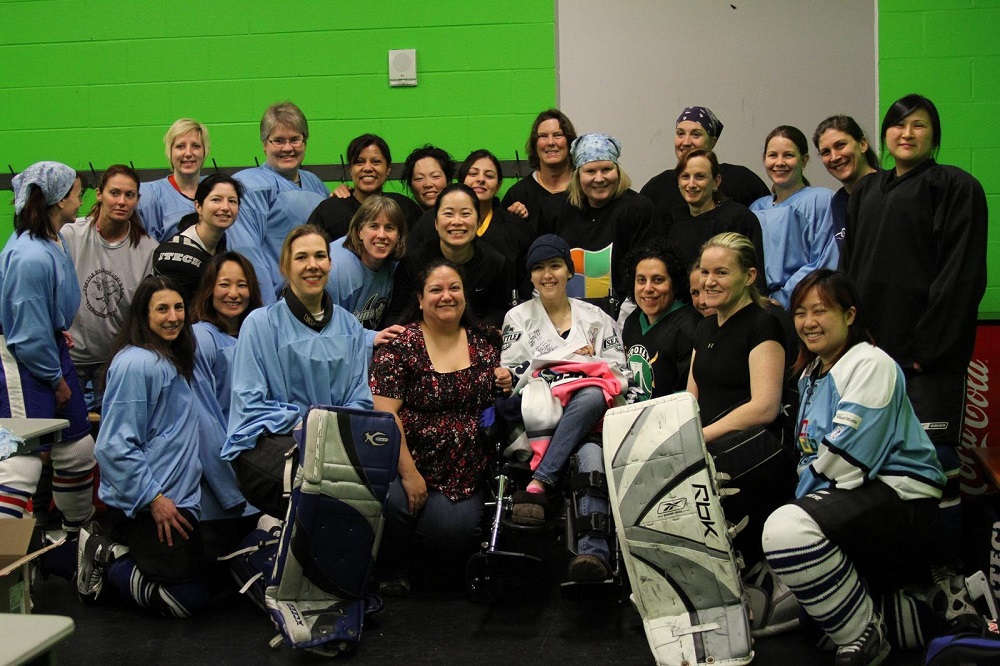 “Our dear friend Katie was a resident at the Ronald McDonald House while undergoing treatment at Seattle Children’s Hospital,” Jackie said. “Katie was an avid hockey fan and we so enjoyed her presence in the locker room before our game, and watching her drop the puck before the Seattle Thunderbirds game that night was a big highlight for all.”

To honor Katie and her mom, the teams changed their names to Katie’s Krushers and Darlis’ Dangers. Jackie and some of her teammates spent time with Katie off the ice, too. “She always inspired us with her zest for life and strength in the fight against osteosarcoma.”

Sadly, Katie passed away in 2015, but her strength lives on in Jackie and her team, which still carries the name Katie’s Krushers. 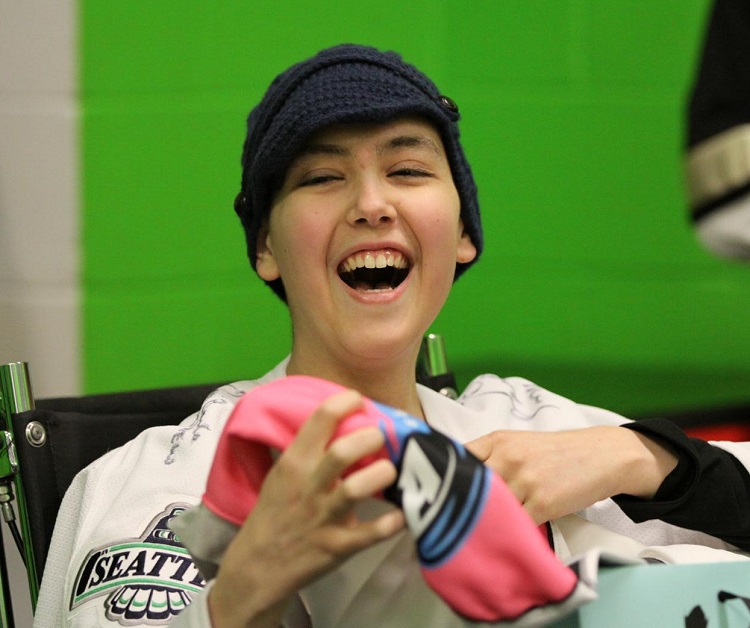 Jackie and John are consistently among the top fundraisers for the Hockey Challenge, making them eligible to play in All Star games which feature former T-Birds players and other local celebrities, including news and radio personalities, like Steve Migs from BJ and Migs Mornings on Seattle’s rock station, 99.9 KISW. An avid hockey fan and player, Steve has backstopped one of the All Star teams for the past seven years.

“When I was first asked to take part in it, I barely knew how to skate (I played roller hockey most of my life, not ice). The opportunity to share the ice with some former pros and other luminaries, and to do it for a great cause… it was a no-brainer for me.” 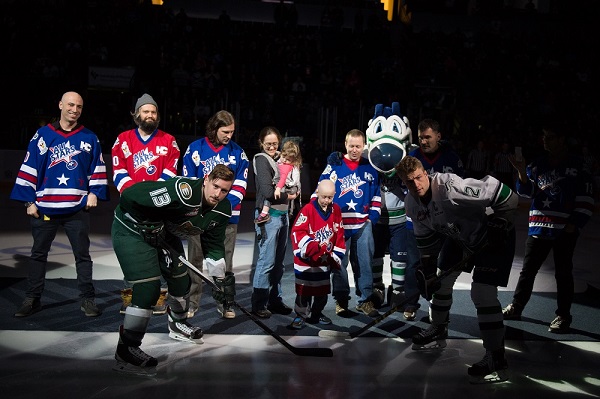 Steve says seeing just how vital the Ronald McDonald House is for young patients and their families, keeps him coming back, year after year. “If by me playing they can add even a couple more dollars to the cause, how could I ever miss it? Plus, meeting and reconnecting with great people from all walks of life (that share a love for hockey), and the laughs that we share in the locker room, makes it an unforgettable experience.”

I asked Steve, John, and Jackie to share one of their most memorable moments from a past tournament.

Steve: The first one I played was very memorable…like I mentioned earlier, the first one I played was when I was very new to playing ice hockey.  The first one I played was back in the Key Arena, and I honestly only skated 3 or 4 times before playing.  I was wearing skates 2 sizes too big, so I was skating on clown shoes basically.  I couldn’t stop a beach ball in that game (I’m a goalie).  I think I faced 10 shots and somehow let 11 goals in (laughs).  I’ll never forget former Washington Capitals player, Mark Lofthouse, skating over to me at one point and said “you know if you didn’t move…you probably would have stopped half of those goals”. The both of us couldn’t stop laughing.

John: I take so much joy seeing my teams and friends out there it’s really hard to pick any one moment. The best thing is seeing people I’ve introduced to the challenge out there playing with my team or other teams while raising money for the RMHC.

Jackie: Undoubtedly it was in 2012 with the visit of Katie and her Mom in our locker room. It was the bonding we all had and I kept in touch with them after the event. In getting to know one of the families up close and personal, as well as meeting their friends and other families, it makes you realize the impact that you can help make for them and for the House.

Jackie: Jamie Huscroft. He goofs around and teases me on the ice. At the same time, he’s very encouraging. I’ve taken lessons from him in the past and after last year’s game and getting schooled by him, I told him I needed more lessons. He said no number of lessons could ever help me!! Brendan Witt is also a lot of fun to skate with—we’ve already started the trash-talking on Twitter and for some reason, Jamie and Brendan are yet again my opponents this year.

John: I’ve known him for a while and consider him a friend but Former NHLer Jamie Huscroft is a lot of fun to skate with…well really against. He definitely likes to give people a little check against the boards or a hook with the stick as you try to skate past him. He is just out there smiling and having a good time. That is what the all-star game is all about.

Steve: Brendan Witt…not only was he one of my favorite players to watch play when he was in the NHL…but him and I are huge fans of rock music, and he has some great stories of playing in Seattle around the time the Seattle scene was exploding (early 90’s).

It’s not too late to support Jackie and John in this year’s Challenge.

CLICK HERE for more information about the Challenge, including a more complete list of local celebrities and former players taking part in the All Star game.

CLICK HERE to purchase Hockey Challenge tickets (they’re good for every game!), or go to the ShoWare Center box office.

More information about The Hockey Challenge

The Hockey Challenge began in 1998, when hockey-playing Microsoft employees, with the help of the Thunderbirds, took an in-house rivalry public and decided to raise money for the Ronald McDonald House Charities of Western Washington and Alaska. Since its inception, the Challenge has raised more than $4.9 million for RMHC, which provides a “home-away-from-home” for children and their families during medical treatment, making each day a little easier. (From Seattle Thunderbirds press release)