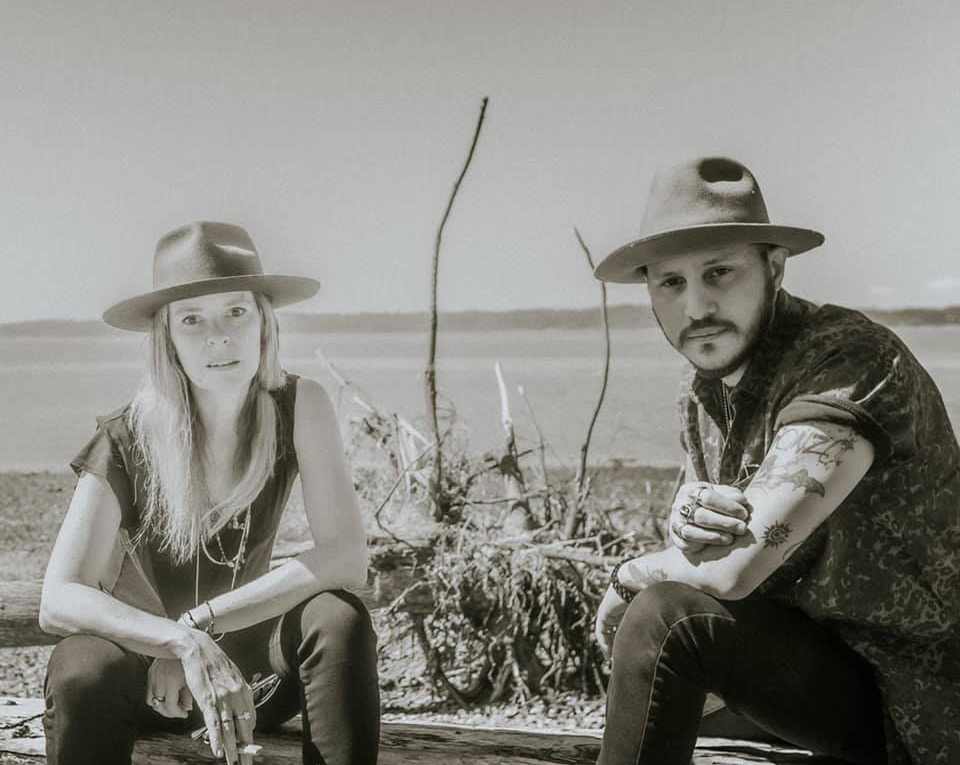 The past year has been anything but ordinary, yet, there have been moments of brightness as artists, writers, and musicians seek comfort in their craft. Kate Neckel and Eric Lilavois undertook a musical journey resulting in Rêver, the début album for their band, The Copper Trees.

When I chatted with the Seattle duo in August for Northwest Music Scene, Kate and Eric had completed their first song, “Eyes.” They talked about what brought them together as creative partners and how well their energies have meshed as they undertook their first musical project. Since that conversation, they’ve written and recorded eleven songs. The album comes out in spring, but the first single, “First Light,” was released on Tuesday.

Kate and Eric took time out of their busy schedules (she’s a renowned artist and musician in her own right, and he, in addition to being a highly regarded music producer and artist, owns the iconic London Bridge recording studio – see more info below) to bring me up to date.

SR: The pandemic has sapped energy and motivation for so many people. How has it affected you?

Kate: I went in the opposite direction. I found this past year to be one of the most creative times that I’ve really ever experienced, in a lot of ways. I’ve always been intentional about my creative process, drawing sketches, playing a couple of chords, but during the pandemic, I’ve been even more intentional about creating and picking up the pen, writing songs, anything. It’s as important as taking a walk or making healthy food for yourself. It’s just been an essential ingredient to this time for me. Even if I’m not really feeling it (and there definitely have been peaks and valleys), it helps me cope.

Eric: I had peaks and valleys, for sure. There was an enormous amount of enthusiasm, in terms of collaborating with Kate and getting The Copper Trees moving. At first, we were super bummed out that this was happening during the time period where we were right at the beginning of our collaboration. We pushed through it, knowing the spirit of what we wanted to do was there and we had to find different ways to operate. In terms of other creative stuff, some journaling came back for me, painting certainly came back for me, as a coping mechanism for what was going on in the world and on the news.

SR: Tell me more about the album and the songs you’ve included, especially “First Light.”

Eric: We’re both sensitive to each other’s energies and our shared energy. These songs – the way they came together – was very effortless, in a way. The way that we crafted them was genuine and pure. Once that creation happens, you start moving into “How are we gonna share this?” Then the creative energy gets moved into that headspace and that’s probably where we’re at right now. We’re happy to share what that connected energy has brought us.

Kate: We kept gathering the songs and working on them all and letting them evolve into what they wanted to be. “First Light” is one that we had in the mix, but we set it aside. And then, it kind of spoke out to us. I remember talking with Eric and saying, “What about First Light?” because we had ten songs and “First Light” wasn’t part of the list. That’s how the process has been – we feel our way through it. Shaping the album is like shaping a family – putting the puzzle pieces together. “First Light” was the last song we added and now it’s the first single.

SR: Eric, you say “First Light” takes place in that narrow space between light and dark, and the urgency that comes with that predicament. Listening to it, the song sounds like half a conversation happening but both of you on the same page. Like, when you’re having those thoughts at 4 o’clock in the morning and you can’t sleep.

Eric: Yeah, definitely. They can’t exist without each other, dark and light. You’ve gotta go through one to get to the other. There’s no way around it. Your instincts on the record are definitely right. There’s a flow to it and this single is like the connective tissue and I think that’s why we chose for it to come first. I’m so glad that the conversation that we had when we were putting it together and the realization that we had toward putting it back into the mix. Creating it – Kate was the one to say, “I don’t know, there’s something there…”

Kate: It was my producer moment. We’re co-producing this album together and we put on our different hats. The producer in me knew this song needs to be on the album. I didn’t know where my voice would land in this one. I just loved his voice on it, it’s beautiful. I love how he opens up and belts it out there. But that’s the way we work together. I knew we needed the song on there and Eric was very intentional about my voice and giving me that little (sings “that first light I see”) at the end, just this little, I don’t know, conversation.

Eric: It’s conversation and the way it’s crafted is the same – I think that’s what Kate’s describing. It’s the see-saw of energy that we exchange and it’s like tossing the hat to each other.

SR: When I listened to it, I thought of Kate’s voice as your conscience talking to you.

Eric: Yeah, definitely. That’s a huge part of our process. You can call our sound “raw and stripped down” but it’s interesting that what happens are little moments that are extremely intentional, so even though you might think of it as “raw and stripped down,” there’s a whole lot of depth that goes into it.

SR: I wouldn’t call it “raw and stripped down.” To me, that’s someone on stage with a guitar. There’s so much nuance in what you’re doing. It’s not overlayered, but there is depth to it.

Kate: I think you’re right on. That’s how I feel – like a little voice in his head on that song, a little light.

Eric: In fairness, you’re always a little voice in my head, a little light.

SR: How many songs are on the album?

SR: What’s the journey through the album like? I’ve only heard two songs, but I feel as though your album will be quite a journey.

Eric: There’s everything from stripped-down tunes to voice memos we kept because that the moment it leapt out, we knew we didn’t want to touch it or change it. We kept all of that in mind as we were doing the placement of the record, too, so some of it is linear, timeline-wise, while other things – spoiler alert – “Eyes” is the last song on the record, so it’s kind of a cool circle.

Kate: I look at it like a film. I kept thinking and as the songs evolved, I said to Eric, “This song fits into this part of the story,” and another spoiler alert, it starts off with a little New York City spirit. It starts off with a very straightforward, New York City voice, and then we come together, move alone. It’s a journey. You’re spot on with that sentiment of it being intentionally placed because it all is.

Eric: With the end of the record being “Eyes,” it’s like a little symbolism that we’re just getting started here. We’re just getting warmed up. The last song on this record goes back to our first moments together.

SR: Tell me about the album name, Rêver.

Kate: It means “to dream.” We both landed on it after an exploration of this little French book that Eric had from – I don’t know where that came from, Eric.

Kate: I lived in Paris for a while and we both have this love for the history and the language, so it felt like it fit our album. It feels like a dream.

More about Kate and Eric:

Kate is an acclaimed  artist, photographer, and musician, whose work has appeared in magazines like Vogue, GQ, and Vanity Fair, and whose art has been commissioned by the likes of Viyet/Sotheby’s Home and the New York Times. Kate’s creative resume includes stints with rock icon David Byrne and fashion designer Zac Posen. Most recently, she teamed up with Pearl Jam’s Mike McCready for “Infinite Color and Sound,” a massive interactive art and music project that exhibited in New York, Seattle, and Big Sky (Montana).

Eric is an acclaimed producer, musician, and songwriter, whose work has appeared on shows like NBC’s The Voice, Counting Cars, and Pawn Stars, and has worked with countless bands, including My Chemical Romance and Seattle-based rocker Ayron Jones. Eric also owns the iconic London Bridge Studio, which helped amplify the “Seattle Sound” carved out by Alice in Chains, Pearl Jam, Soundgarden, Mother Love Bone and Temple of the Dog. The “Who’s Who” of bands that have recorded there represent an array of genres, from rock (Fleet Foxes, Dave Matthews Band, Brandi Carlile), to rap (Macklemore), and more.